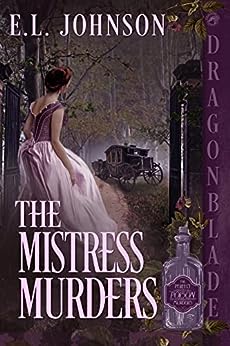 The Mistress Murders by E.L. Johnson

A poisonous letter writer is killing off the mistresses of London. Can Poppy find the culprit in time?

In search of her mother, a mistress in the nation’s capital, Poppy goes to London and takes a position as a lady’s companion. But when her new employer is revealed to be a mistress, Poppy is at odds with herself. To ally herself with a woman of ill repute could damage her reputation, but to leave her employ would remove all chance of finding her mother.

Beatrice, Poppy’s new employer, needs more than companionship. Beatrice and her fellow mistresses have received threatening letters from an unknown person, with death as the end result. And with one mistress dead and another missing, these letters are no joke.

Poppy decides to stay, even if it means risking her reputation and consorting with pimps and prostitutes to find the truth. Poppy and her beloved constable, Henry Dyngley, must find the poisonous letter writer behind these attacks. But they also cannot ignore their growing feelings for each other, especially when Dyngley faces competition for Poppy’s affection.

Will Poppy find her mother? Will she and Dyngley track down the killer before another mistress dies? Will Poppy’s reputation be ruined for being a companion to a mistress? Ultimately Poppy must decide, is it worth a ruined reputation if it means finding the mother she never knew?

Find out in a new historical mystery from bestselling author E.L. Johnson. This is the third in the Perfect Poison series, starring Poppy Morton and Constable Henry Dyngley.