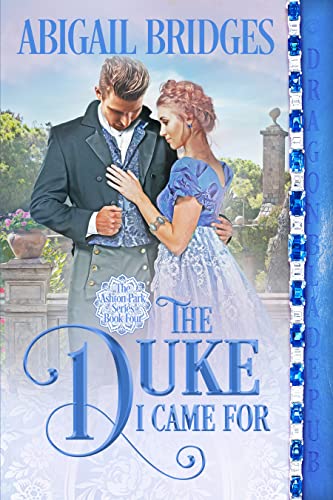 The Duke I Came For by Abigail Bridges

Neither of them is where they want to be. They are, however, where they need to be.

Lady Elizabeth Ashton had been one of the 1825 season’s best-known and desired debutantes. But when her brother’s scandal leaves Beth’s reputation in tatters, she seeks refuge at the northern estate of her sister-in-law’s aunt. But all is not as it appears at the home of Lady Sophia Timmons, and Beth soon discovers Sophia is quietly providing a refuge for young women who have been ruined—a secret the entire household works to keep hidden.

But as Beth heads north, Richard Christopher Caudale, Duke of Kirkstone, heads south. Kit has been searching for his sister Mary for months and has tracked her to the home of Lady Sophia Timmons. But the weeks on the road have taken their toll, and by the time Kit arrives at Timmons House, he collapses, ill and close to death.

On impulse Beth volunteers to nurse the young duke back to health, vowing to keep Sophia’s secret safe. Mary, however, is in the house and for the same reason as Sophia’s other guests—she is with child, ruined and at risk of destroying her family. As Kit heals, however, Beth devises an outrageous plan to salvage them all.

If only Kit is courageous and daring enough to try.